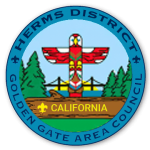 Councils which the district has been a part of

The current Herms District is believed to have been formed in 1975 from the merger of at least two districts (one being the Berkeley District of the Mt. Diablo Council).The district can trace one of its roots back to the original Berkeley Council, the first council in Northern California chartered by the Boy Scouts of America in May 1916.